A Webpage by Nikolas Dennis

When you think of a comic book, the first thing that comes to mind is probably a bunch of costumed crusaders in bright colored leotards with capes, all encapsulated in a structure of panels of all different shapes. Word and thought bubbles decorate the images, spaced in such a way that you don't get too much text at any one time. The layout of words and contrast of the colors is something that can be hammered out in a week or so for single issues handled by the big guys such as Marvel and DC, but for the small, independent graphic novels, much more time is taken to conceptualize, sketch, and fully ink a work.

A single page may have taken several days to mock up, and while the process may prove to be arduous, in the case of 30 Days of Night, you can create something that turns horror visuals on its head. The three issue mini-series was written by Steve Niles and illustrated by Ben Templesmith. Its three issues were published and released once a month from August to October of 2002, and it was such a hit that Hollywood turned it into a feature film.

Immediately upon opening the trade paperback collection, one can see that there is a very dark color palette. There are a few splashes of light to highlight details on main characters and events, perhaps a singular bulb at the counter of a diner, or the headlights of a town sheriff patrol car. With this idea of visualization in mind, I wanted to see how the color changes over the timeline of the complete annihilation of Barrow, Alaska. I thought it would be interesting to see where certain colors really show through, like the deep reds when the vampires overrun the town and begin their month long bloodbath. To accomplish this, I set out to learn as much as I needed to use software called ImageJ. It's a program developed by the NIH to help gather data and produce better observations from the pictures taken by an MRI machine. I was just working with horizontal and vertical data from the scanned comic book pages, no real depth, so I figured it would be a piece of cake.

I was so very wrong. It took me days to finally get the program to do something I wanted it to, and I contacted a professor at the City University of New York for assistance. He placed his email on one of the plugins I had been trying to use, and his computer science expertise proved incredibly helpful. Below are some of the scans and composite images I was able to create. 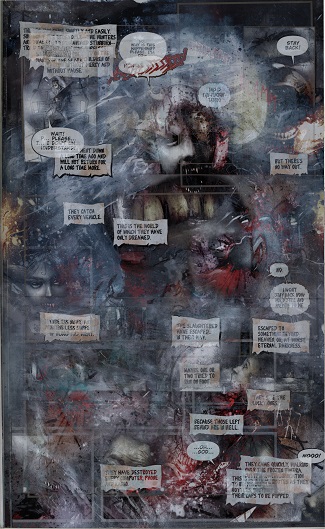 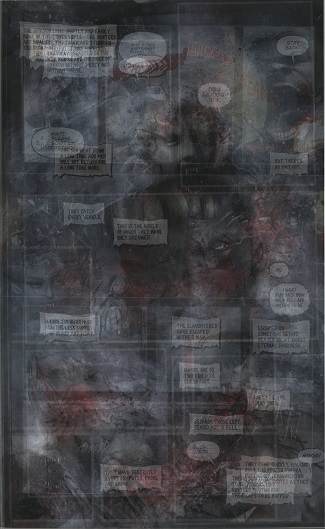 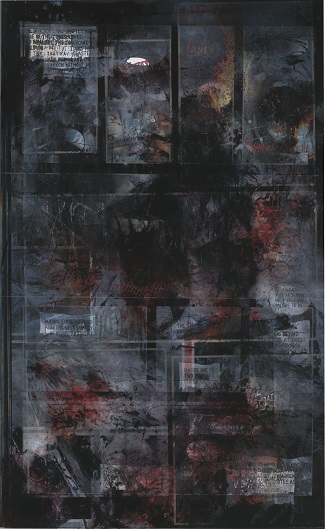 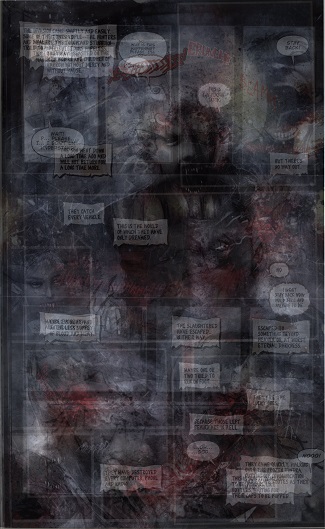 From left to right, the scans highlight the standard deviation intensity of each pixel, then the max intensity, followed by the median intensity, and then the sum of the intensities of each page on top of one another.

In the above image, you can see the spacing of the bubbles throughout the scene. In some places your eyes will remain, but the deep reds pull your eyes up and down as you turn the pages. The upper left and lower right seem to be hotspots for text. The third image, however, highlights how this is very much a dark comic; there's a lot of black all over the place, and the median intensity ImageJ setting shows this particularly.

This is another image I was able to create using a program created by my professor called IMJ, which stands for Image Macroanalysis in Java. Using the barcode visualization tool, I was able to stitch together all eighty pages of 30 Days of Night to better see how the palette changes. Starting with the first few scans, you can immediately see the transition from the dull Alaskan sun to complete nighttime in the town of Barrow. The deep reds from the bloody scenes are also discernible, and the moment where parts of the town begin to burn is very easy to identify.

Something I didn't notice during the multiple times I've read this work is how the meetings with the voodoo mother and son feature a similar set of colors to the sunrise at the very end of the story. Another interesting thing that you can see in the barcode is exactly where the spine of the trade began to fall apart. From folding the book over and over again to fit in a scanner, one set of the pages actually fell out, resulting in a large amount of white space in the scan, which can easily be identified.